Thanks for signing up!

“In the time I have lived in Portland, I have seen campaign expenditures sky-rocket. I have seen upwards of $100,000 spent on local races, which is more than anyone should be spending,” said Sen. Chipman. “I thank my colleagues for supporting this bill which will help us get back to the true nature of campaigning in local door-to-door grassroots efforts, not with big money.”

In 2011, the prior administration made a change that doubled the amount allowable for contributions to candidates for municipal office. This bill corrects the 2011 change, reducing the maximum allowable contribution from $850 to $500.

LD 780 faces further votes in the Maine House and Senate before it is sent to Gov. Janet Mills for signature. 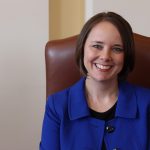 Sen. Shenna Bellows, D-Manchester, is applauding a court ruling issued today in favor of a law she sponsored that protects Mainers’ privacy...

AUGUSTA – Sen. Mike Carpenter, D-Houlton, announced the addition of more than $14 million to Maine’s Unclaimed Property Fund, and Mainers are...